Eeek!  I just looked at my calendar.  The end of November is here and I'm a little behind on my reading schedule.  Back in March, I challenged you all to read along with me as we devour 50 books in 2012.  I've been so focused on writing, reading, and drawing picture books this month that I let my book list slide.  I counted 43 to date, so my plan is to get back on track by finishing the books below before month's end.


If you have a reading goal for this year, why not take the time to evaluate and get back on the wagon, or the bookmobile, as the case may be?


Posted by Joanne Roberts at 2:00 AM No comments:

I promised to post a few more sketches from my November SkADaMo attempts.  Here are three clockpunk contraptions.  I actually used my sketch-a-day to refine some designs I was working on for my entry in the Songs for a Machine Age contest.  I'll post my final design next Tuesday.


Interestingly, James Gurney also posted some concept sketches today for a steampunk digging machine he designed back in the 80's.
Posted by Joanne Roberts at 2:00 AM 2 comments:

Reading in the Loo

"Even now, if I visit a strange bathroom in which someone has been inconsiderate enough not to have provided books to read, I'll read the label on the toiletries."

I had been happily cruising along in my PiBoIdMo notebook, alternating lists of ideas with doodles to get the creative juices flowing.  I had rehearsed my new battle cry: Silence The Inner Critic.  Up to now, it had been working. 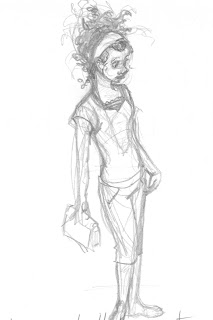 As I paged through the first dozen drawings, my critic resurfaced.

He shouted, "You can do better than that!"

He fairly screamed, "Aren't you embarassed?" 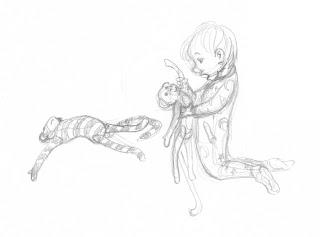 I have agonized these last nine days over putting pencil to paper.  I have struggled with wanting to experiment, to stretch myself, to enjoy the process versus being willing to allow myself to be exposed as anything less than polished.

My solution is simple, but not easy:
When my Inner Critic shouts, his voice is drowned out by a murmuring chorus. 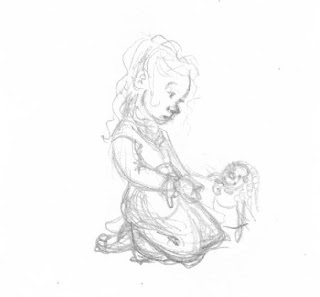 I hear Deborah Freedman whisper, "Occupy til there is no more shouting and it is quiet."

I remember Kelly Light telling me not to sink into the pit of self-doubt.

And I hear all the voices of all the talented book-making, book-loving people like Tara Lazar who support each other on the journey to Becoming.  This is what I am thankful for this November.

"Every great literature has always been allegorical - allegorical of some view of the whole universe."


Posted by Joanne Roberts at 2:00 AM No comments:

On our last trip to the library, our youngest brought home Lucky's 24 hour Garage, by Daniel Kirk.  OK, I admit it.  I would never have picked up this book without a little prodding.   It appeared interesting enough and has a great retro style, but I'm a fairy tale kinda gal.  Yikes!  I have never been more wrong about a book.  I love every inch of Lucky's 24 Hour Garage, from the cherry red gas pumps to Angelo's navy blue hat.
Many of you may be familiar with Daniel Kirk.  His picture book illustrations for Chugga-Chugga Choo-Choo and My Truck is Stuck!, both by Kevin Lewis, brought him national acclaim.  But back in 1996, Mr. Kirk authored and illustrated this little beauty.  His meticulous research shows in the lavishly painted spreads which seem to have a warm incandescent glow.  The reader is introduced to an increasingly interesting cast of characters even as he (or she!) is immersed in urban America, 1939.  The author manages to exude nostalgia without getting one bit sappy.  And the lilting text on the final page leaves me with a satisfied sigh.

In an industry that is begging for better "boys" books, this gem is sure to fit the bill.  But don't overlook its charm for all ages and genders.

So my apologies to Daniel Kirk.  I should have known better.

Daniel Kirk also made an appearance at the Lititz Kid-Lit Festival last weekend, hosted by Aaron's Books.  Check out this report from Erik at ThisKidReviewsBooks.

"You can cover a great deal of country in books." 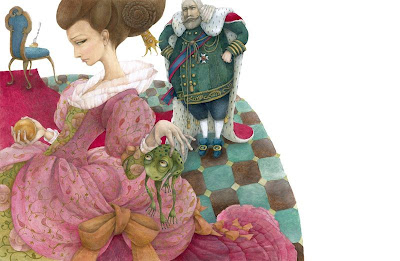 Lina Dudaite, Lithuanian artist and graphic designer, is a fresh face in the world of children's book illustration.  Her portfolio is overflowing with fairy tale characters.  Lina's quirky sense of humor is a perfect match for many publishers.  Her muted colors and unique sense of design bring a fresh energy to these ancient tales.

Information about her is scarce.  It seems she got some much deserved attention at the Bologna Book Fair for her work on The Seagull and the Cat Who Showed It How To Fly.  We  look forward to seeing Lina's work in American bookstores very soon.
Posted by Joanne Roberts at 2:00 AM No comments:

Thank you Tara Lazar for getting Emma Ledbetter as a guest on your PiBoIdMo blog.

". . . there’s nothing in the world that sticks with you like a picture book. Think about your favorite book when you were little. Why do you still remember it? The most special of special characters, voices, stories—they all contribute to this warm little nugget of childhood that you’ll carry around with you forever. You can’t create that by hitching a ride on the big, flashy, commercial, book-selling train of the moment. You create that by pulling your inspiration directly from that spot, by reigniting that spark from your childhood and writing from your heart."

This was the invaluable advice from Emma Ledbetter, editorial assistant at Atheneum Books for Young Readers, an Imprint of Simon & Schuster.

She edits all kinds of books, but I think it's appropriate for Picture Book Month to focus on the books from our past which made an impression, subtle or dramatic.

Here are three of her favorites and below you'll find three of mine to help you celebrate Picture Book Month.


Posted by Joanne Roberts at 10:08 AM No comments:

Dracula and His Legacy 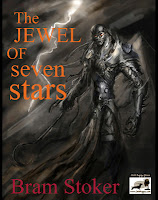 So wrote Bram Stoker in his book, The Jewel of the Seven Stars.  Today is the anniversary of the author's birth and I thought this quote apropos for encouraging us during a month of concentration on the picture book craft.  Whether you're participating in PiBoIdMo or SkADaMo or even NaNoWriMo, Dracula may provide a needed jump-start.

If you've never read the original Dracula, I highly recommend you pick up a copy, but you may need to sleep with the light on.  Take a break from today's cheap vampire imitations.  Sink your teeth into writing that transcends its era.

In honor of PBM, you may want to peruse the lavishly illustrated Hildebrandt picture storybook or a graphic novel version, like the one from All-Action Classics.

Just for Fun, why not try Loren Estleman's entertaining The Adventure of the Sanguinary Count, which pits Dracula against consulting detective Sherlock Holmes.


If you're interested in Bram Stoker and his writing, check out the Rosenbach Museum, featured last March on BookishAmbition.
Posted by Joanne Roberts at 12:01 AM No comments:

"Reading makes emigrants of us all. It takes us away from home, but more important, it finds homes for us everywhere."

Posted by Joanne Roberts at 9:46 PM No comments: 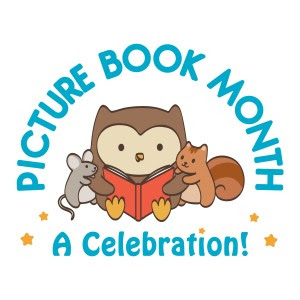 November has been declared Picture Book Month.   Dianne de Las Casas, along with Elizabeth Dulemba, Katie Davis, Tara Lazar, and Wendy Martin, have worked tirelessly to promote the health and well-being of the picture book.  Check out the why's and how's of picture book creation, dissect a picture book, borrow a stack from the library, or just read one to your favorite person.  Any way you celebrate, you can't lose when you dive into the pages of a picture book.

Here are a few more links to get you started:

Call me crazy, but I've signed up for another November challenge: SkADaMo!

Linda is a talented illustrator who challenged herself  last November during PiBoIdMo.  She wanted to do more than just write her picture book ideas, she wanted to keep herself sketching.  Linda has invited us to join her in her quest for daily sketchiness.

I read about the informal event by way of Jennifer Bower, talented in her own right, who has combined Picture Book Idea Month and a Sketch A Day as a way to boost her creativity.  I became familiar with Jennifer's work during KidLitArt Chats on Thursday night.  Isn't networking great!

Sketch every day this month.  Tweet it, post it, blog about it, or just enjoy four weeks worth of verbal and graphic brainstorming.

Now if you'll excuse me, it's time to let the creative juices flow.

Posted by Joanne Roberts at 10:19 PM No comments:

Joanne Roberts
Thanks for stopping by my site. I'm a children's illustrator and writer who can't get enough kidlit. At Bookish Ambition you can learn about writing challenges, illustrating contests, gallery events, book reviews, fabulous artists, and talented authors. Along the way, you'll hear the ins and outs of my own creative journey. From newbie to Newbery, it's my hope you'll find something valuable here.

FOR THE LOVE OF BOOKS

I also offer manuscript critiques for writers of picture and chapter books.

Send your work into the world!

Join the Nerdy Chicks as the plot thickens!

I finished my first draft!

21 Days of Advice and Exercises

Use the prompts all year long!

I made my goal!